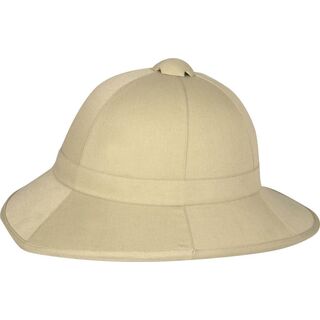 The Wolseley pattern pith helmet is a distinctive British design developed and popularised in the late-19th/early-20th century. With its swept-back brim it provided greater protection from the sun than the old Foreign Service helmet, and its use was soon widespread among British personnel serving overseas.

Through the first half of the twentieth century, the Wolseley pattern helmet was worn with civil uniform by British colonial, diplomatic and consular officials serving in 'hot climates'. It was worn with a gilt badge of the royal arms at the front. When worn by Governors and Governors-general the helmet was topped by a 10-inch red and white swan-feather plume