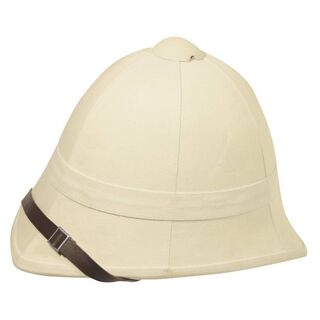 The pith helmet is one of the most recognisable British Icons of the British colonial past.

The Army pith helmet was very quickly an essential accessory by civilians in the far corners of the British Empire. The pith helmet began life as military head gear uniform and was a development of German soldiers helmets of the 1870s. English soldiers during the Boer War 1899 1902 in South Africa used tea to dye their helmets the distinctive beige colour in order to give them better camouflage. They soon became standard issue and their popularity, which wasnt limited to English colonial societies.

The rebel fighters in Viet Minh adapted a variation of the French colonisers pith helmet for there own use.

Made from trees grown in the northern part of Vietnam. The pith helmet material can sustain heavy sunlight as well as rain. When wet the pith helmet may become a bit softer, but then dries to its original state. The Vietnamese learned the art of pith helmet manufacturing a hundred years ago from the French during their occupation.